There are many factors transfer students consider when choosing a four-year institution: how many credits will they take, how long will it take to finish, how much will it cost, where will I live, what clubs and activities do they offer….and what research opportunities are available. This last question was what led Senior Haviv Avrahami to Appalachian State University.

His journey though was untraditional, even amongst the non-traditional route transfer students often take. Frustrated by the authoritative atmosphere of high school and a lack of self confidence in his academic ability, Haviv dropped out of high school. He spent time working various jobs in fast food and at a doggy day care before venturing to Forsyth Community College and enrolling in their Middle College program which helped him earn his high school degree while starting to take some college classes.

Despite a rough high school experience he always had a love of science. Influenced by the character Ross Geller from the TV series Friends and the movie Jurassic Park, a supportive group of high school friends that never gave up on him, and his mother, Haviv set his eyes on studying at North Carolina State for paleontology. With that in mind, Haviv transferred to Wake Technical Community College and obtained his associate degree. It was during this time that he met Appalachian’s Dr. Heckert who convinced him to to give Appalachian a look. Haviv explained that what really got his attention was that since there are no graduate programs in geology at Appalachian, undergraduates get the research experience typically reserved for graduate students. Haviv spends much of his time in the department’s geology lab taking advantage of his professor’s knowledge and guidance.

While volunteering at the North Carolina Museum of Natural Sciences in Raleigh, Haviv took a field course in Utah where he found a new species of dinosaur. This discovery, along with conducting independent research under the guidance of Dr. Heckert, provided Haviv with a great confidence boost that has propelled him to continue his academic career and present his research at national conferences. He plans to attend graduate school this fall at NC State and eventually aspires to obtain his Ph.D. so he can one day lead a museum and a team to conduct further research.

As he prepares to graduate in May, Haviv reflected back on his educational path and time at Appalachian. While he integrated quickly into geology he does wish he plugged into campus life more. Though he attended some Campus Ministry and the Hispanic Student Association meetings, he wished he had gone deeper with his involvement. He does recommend though that whatever you get involved with you go beyond the meetings. He credited the field trips his geology classes took with providing bonding opportunities with other geology students. Overall, his story emulates the best advice not only for transfer students but for all students - don’t get discouraged and don’t give up. Haviv could have turned his back on education when he dropped out of high school; instead he has his eyes set on a Ph.D. And after some time in his company talking to him, we know he will get there and succeed! 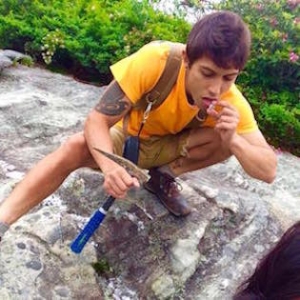 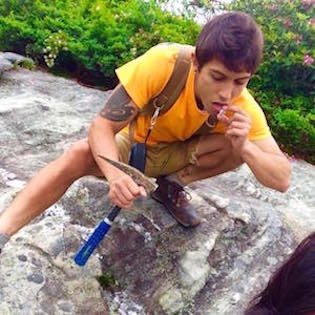